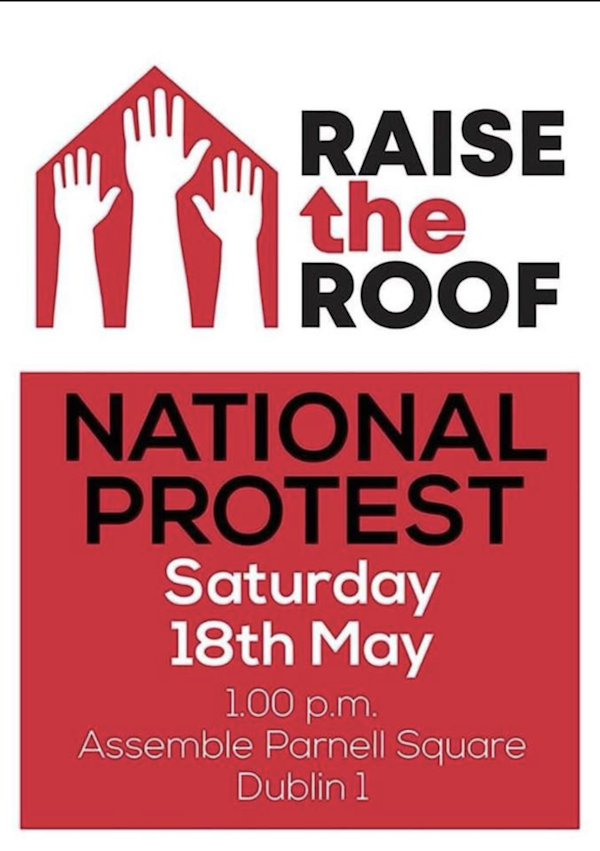 On Saturday 18 May a major ‘Raise the Roof’ demonstration took place in Dublin. There were some 15,000 – 20,000 participants on the protest, which was joined by participants wanting to challenge the government’s approach to housing and homelessness.

The housing situation in Ireland is a scandal and the strongest evidence that the Fine Gael – Finian McGrath government cares only for landlords and property owners.

When gathered outside the GPO, several speakers addressed the marchers, including Fr Peter McVerry, experienced campaigner on the issue.

Fr Peter McVerry told the crowds the situation was catastrophic, with record levels of rents and rising prices. It was so obvious that the governments housing strategy was not working that even a twelve-year-old could see it. And yet, each time the figures came out and showed a worsening situation, Ministers came out to defend the strategy.

Half a million people have a stressful housing situation (whether overcrowding, poor quality, being forced to stay at home or financial).

McVerry even cited Karl Marx in pointing to the fact that there were people paying over sixty per cent of their wages to a landlord.

This FineGael government wants us all to realise that it will never lead a massive state-led construction programme of public housing.
In order to get the public and affordable housing we so badly need, we’re gonna have to rid ourselves of this Fine Gael – Finian McGrath government.

We have a vision of Dublin as a “Liveable City”, a city that builds public and affordable housing (and has affordable public transport, becomes a green city, that plays a big role in reversing the affects of climate change, has public well maintained accessible spaces and green areas).