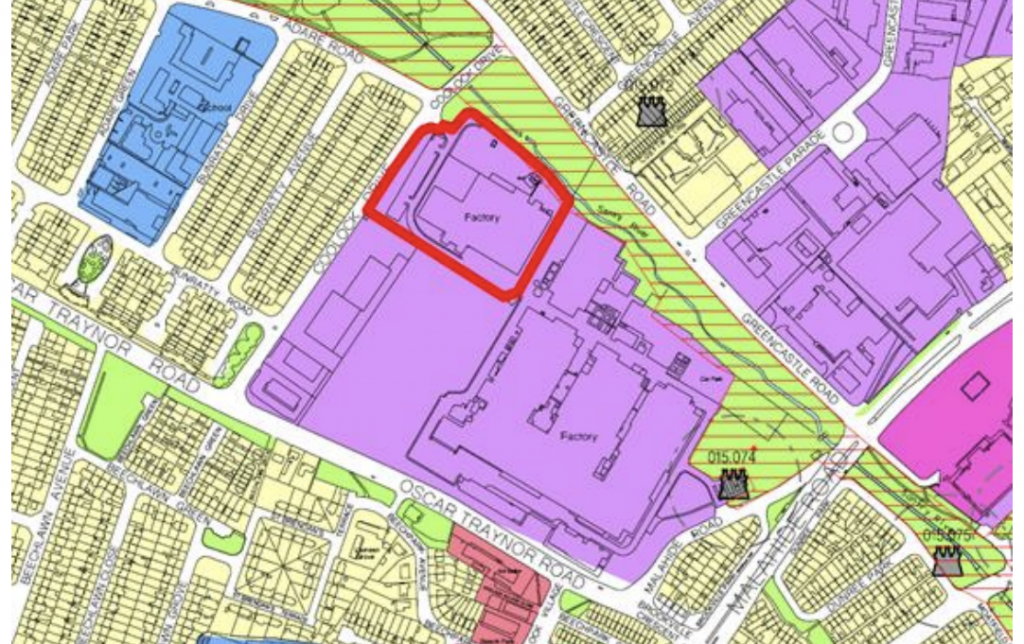 Update on the plan for the Chivers Site

Owners of the old Chivers jam factory site are at it again: breaking commitments previously given, revealing themselves to be nothing but lying property speculators.

Three years have passed since Dublin City councillors rezoned the industrial site in Coolock from industrial to residential; two years since Platinum Land Ltd secured planning permission from An Bord Pleanala to build 471 apartments, a gym, crèche and gardens. And yet the site remains derelict. In the midst of a housing crisis it looks like the owners were sitting on the site, biding their time, waiting for the right moment to move and flip the site.

Nothing of note had happened in relation to this site over the last two years until news emerged last week via the Dublin Inquirer that the site was now being offered for sale by Platinum Land Ltd, which is looking to make a fortune in profit with an asking price of €25 million.

So no affordable housing and community facilities will be delivered on this site, just massive profits for the owners. And still the site will remain idle. In the midst of a housing crisis. Commitments given to the people in Coolock and their local public representatives by the owners of the site that they were here to help alleviate the housing crisis, to play their part in increasing the supply of affordable rental homes, turn out to be nothing but lies spun in order to secure a rezoning of their site.

At the time of the rezoning, myself and other councillors were informed by City Council planners that we could not attach any conditions to our decision. We knew our decision to rezone the land would increase its value many times over and we wanted to ensure that housing would actually be built  but were told that we were legally prohibited from doing so.

In the midst of a housing and homelessness crisis, we had a decision to make: leave the land zoned industrial and lock in another decade or more of dereliction or zone it residential and see the commitments given by the landowners realised in the delivery of new housing in the Coolock area.

We decided to rezone the land from industrial to residential, a decision taken by public representatives in the best interests of the public. Yet we have been betrayed and misled. The intention to sell this undeveloped site with a live planning permission attached shows Platinum Land Ltd in their true light: greedy property speculators who will say and do anything if it makes them a buck.

We have to respond. At the North Central Area Committee of Dublin City Council on Monday 20th September I proposed by way of emergency motion that they city council should initiate a compulsory purchase order (CPO) of the site, the council legally moving to take ownership of the site, for a price estimated as the value of the land prior to the rezoning decision in 2018, namely €2.55 million.

My motion was passed and will go to the full Dublin City Council meeting in October. We need to mobilise in order to build the pressure on the owners of the site and on city council officials to let them know that will not allow massive profiteering from the housing crisis, that we will never believe it acceptable for developers to lie to public representatives, manipulate a housing crisis and fraudulently benefit from decisions taken by public representatives in the best interests of the public with regard to the rezoning of land.

On 21 September 2021, RTE’s Morning Ireland had a feature on the Chivers development, which reminds listeners of the promises made by the developers – in their own words – and gets my response and that of local residents.

Interview between Pat Kenny and myself, for Newstalk, 22 October 2019.

The Fine Gael pro-developer planning system in action: we on Dublin City Council rezoned the old Chivers’ factory site in Coolock from industrial to residential in October 2017 on the advice of the following assessment from DCC’s planners:

‘It is acknowledged that this unit has been vacant for a significant period of time and that the site may not have future potential as an industrial factory type unit. Give the location of the site, particular adjacent to the Santry River and conservation area, and current access off a residential street, a residential redevelopment of the site is considered appropriate in principle.’

Myself and all other North Central area councillors rezoned the land to allow for residential development but we were promised affordable housing and sensible density: 350 affordable units at reasonable heights.

The developer briefed local councillors and held meetings in the local community to inform people of their plans: 350 units at appropriate heights of no more than five storeys.

Fine Gael, however, made two significant changes to the planning system during this time, namely the fast-tracking Strategic Housing Development process which facilitates developers building more than 100 units by-passing the local authority as the planning authority and going straight to An Bord Plenala, which leaves no room for appeal once a planning decision has been reached.

The second change to the planning system was the issuing of new departmental guidelines on building heights, released in December 2018 which totally ripped up our City Development Plan regulations on heights and opened the door to developers to lodge planning applications involving outrageous new heights, like the one at the Chivers’ site.

When we were presented with the proposal, the idea was that the developer would build four apartment blocks, none of which would be more than five stories high. Now, the developers, Platinum, have announced that the maximum height of the apartment blocks will be ten stories high. This has come about as a result of the then Minister for Housing, Eoghan Murphy, removing height restrictions on plans, rendering our efforts to ensure a sustainable and reasonable development meaningless.

It was a very poor planning decision, allowing blocks of apartments eight and nine storeys high in a low-rise residential area.

Yet the only recourse available to anyone not happy with the decision is a judicial review in the courts, which can only challenge how the decision was reached and can costs tens of thousands of euros.

Fine Gael quite clearly allowed Dublin to be shaped by the interests of private capital, and to hell with the communities. And now in partnership with Fianna Fail, they continue to do so.

On 21 October 2019, I called on Platinum Land Ltd to scrap their development plans at that afternoon’s meeting of Dublin City Council North Central Area Committee in Coolock

I sought a full explanation from Andrew Gillick of Platinum Ltd as to why they shifted from their original intention of building 350 apartments in four blocks of varying heights of no more than five storeys to what was disgracefully granted planning permission by An Bord Pleanala, namely 471 apartments in blocks eight and nine storeys high.

The planning application lodged by Platinum Land was an outrageous insult to the local community in Coolock who have been disgracefully deceived by the developers. Over the previous year, Platinum met with the local community and elected representatives, promising that their plan for the former factory site would be a sensible one that integrated the new development into the existing wider low-rise residential community in a sustainable way.

What the people in Coolock now face is a proposed development, given the green light by a highly politicised An Bord Pleanala, that will destroy the visual character of Coolock by allowing blocks of flats eight and nine storeys high in an area predominantly of two-storey houses. This will create an eye-sore that will blight the community for decades to come.

Questions will also be asked about the wisdom of squeezing 471 apartments on a site originally earmarked to have just 350 apartments.

It would appear that the greed of the developer has trumped their promises to the local community and they seem to have little regard for the damage their proposed development will inflict on the area.

This is why I formally requested that Platinum Land Ltd revert to their original plan of providing 350 apartments on the site.

I also demanded that they consult with the local community at the earliest possible date.